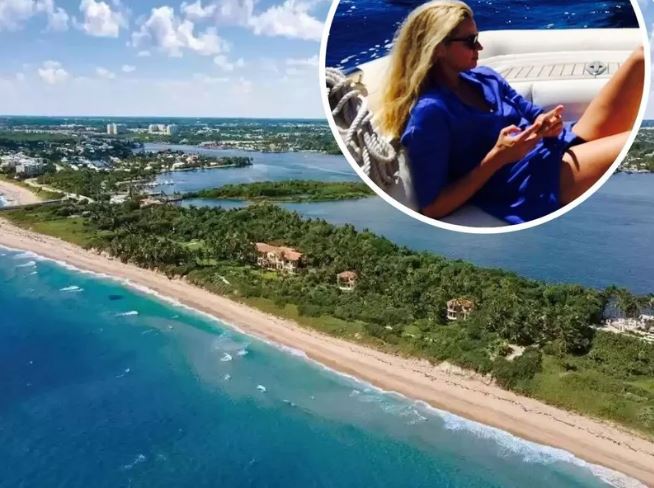 According to the New York Post, the pending sale of the Palm Beach, Florida mansion for around $US175 million ($A251.05m) will smash the previous record for a property transfer in the state by around $US35m.

Hinze Clarke and her billionaire internet beau stand to make around $US81m on the home, which was a “spur of the moment purchase”, in just 15 months.

Will sell for a Florida record of $US175m.

The pool is one of many highlights.

The home sits on an exclusive barrier island, only accessible by a series of tunnels but is only a short drive from the upscale shopping and dining district of Worth Avenue, Palm Beach.

The “15-acre ocean-to-lake estate stands alone in all of the Palm Beaches for its beauty, privacy, amenities and sheer scale”, read the listing when the home was previously on the market.

High end houses like this are in high demand in Florida.

“In total there are more than 30 bedrooms, a series of formal and informal living and dining areas, a media room, libraries, offices, numerous terraces, an expansive wine cellar and two elevators.”

Florida’s has enjoyed a boom at the top end of its real estate market in recent years, with trophy estates in elite enclaves like Palm Beach in very high demand.

Queenslander Hinze, 42, made her name as a model at just 14 when she appeared in Australian Vogue.

Her career highlights include appearing in Sports Illustrated and the Victoria’s Secret Catalogue, as she carved out a reputation for herself in New York with Elite model management.

The home has 360-degree water views.

The couple have owned the home for just over a year.

It boasts more than 50 rooms, including 30 bedrooms.

The home sits on an island barrier, accessible only by a series of tunnels.

She appeared on the 10th season of American’s Next Top Model and hosted Project Runway Australia.

The couple have two daughters.

Jim Clarke and Kristy Hinze-Clark after winning the Sydney to Hobart.

They last prominently featured in Australia in 2015 when Hinze Clark became the first female boat owner to win the prestigious Sydney to Hobart Yacht Race aboard her husband’s boat Comanche.

One of the 30 bedrooms, one for each day of the month.

After exiting Florida the couple say they plan to spend much of their time in New York.

Parts of this article originally appeared in the New York Post and are republished here with permission.